3. Use of Inverted Triads

Why would someone place a 3rd or 5th on the bass instead of the root? The inverted triad offers a different sound or color than its stable root position. It can also make the bass line smoother so it doesn’t have to jump around following only the root of the chord. The example shoes how inversions can make the bass line melodious. 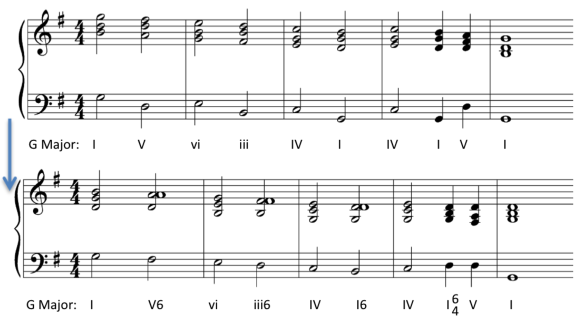 The second inversion tends to be used only in particular situations (cadential, passing, and pedal 6/4) because of its instability. This means that it needs an assistant before and/or after it to sound completed. Traditionally its use has been restricted to tonal music, but as the harmony system has gotten more varied in contemporary music and as people’s tastes have changed, composers have started using it with less caution.

Inverted triads provide a composer with more possibilities. Having more choices on the bass gives more choices to other voice lines, such as soprano. Inverted triads strongly influences the construction of the line of outer voices (soprano and bass), called “voice leading.” Voice leading is tremendously important even in harmonic texture because music always carries harmonic (vertical) and melodic (horizontal) aspects.